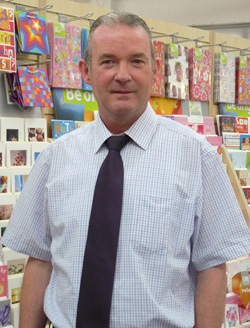 Eamonn Ryan joined the Original Poster Company (OPC) greetings card franchise in 2013 having accepted a voluntary redundancy package from a major beverage company he had been working for for over 30 years.

Eamonn said, “I chose OPC because it has a proven system, is well established having distributed best-selling and diverse ranges of greeting cards through its franchise network for over 20 years.”

Once he had chosen OPC, Eamonn decided to use the redundancy package he had received to fund his purchase of the virgin territory Galway in Ireland.

He spent two days training at Support Office, OPC’s office based in Walton on Thames, Surrey and then a further two weeks were spent with his dedicated regional BDM, Colin Harris, training at home in his stock room and out in the field, visiting retailers.

When asked what sets his franchise apart from the competition, Eamonn replied, “It’s the quality of the product and the level of support we provide that is far superior to others.”

A typical day in his franchise would start on the road by 8:30am visiting and merchandising card spinners and racks in existing outlets, and prospecting for new customers. The day usually ends around 5:30pm after which Eamonn spends about 1 – 2 hours in the evening preparing the cards for his next day’s visits, returning cards to stock or general administration duties.

Selling cards for Eamonn is not too different to selling beverages except that with OPC, the retailers only pay for the cards they sell. On a personal note, Eamonn can now claim his time as his own and take days off when he chooses, always aware though that the franchise is only worth as much work as he puts into it.

For those interested in franchising, Eamonn recommends, “Try match your skills to the franchise or be willing to learn them. You need commitment and must be willing to work hard especially in first year. Look around, talk to other franchisees. Finally, chose a proven franchise and know how much it will cost you – don’t just think about the start-up cost.”

Eamonn plans to use his time and energy in a more focused and productive way for the future of his franchise, continuing to grow the business and to never become complacent.

His answer when asked would you chose an OPC franchise and do it all again? “Definitely!”