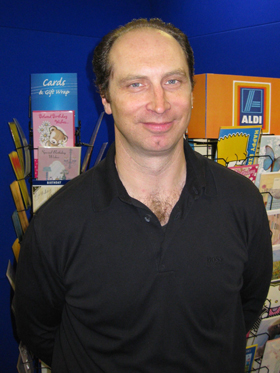 Card Connection is the market leader in Ireland for the franchised distribution of greeting cards. Dublin based, Simon Linscheid is one of Card Connection’s most successful franchisees and has almost doubled the size of his business within four years. He has grown his team to six employees and now supplies 250 retailers with Card Connection’s quality greetings cards and accessories.

Prior to entering the world of franchising, Simon Linscheid was a professional athlete. He was a hammer and discus specialist before being selected to represent Ireland in the four-man bobsleigh team which competed in the 1998 Winter Olympics held in Japan. After that, Simon worked as a Texaco franchisee for ten years, when he was introduced to Card Connection as a retail customer. He joined Card Connection as a franchisee in 2011 and now supplies stores around Dublin with Card Connection’s extensive range of quality greeting cards and accessories.

Simon Linscheid explains: “I had an unusual career path but I think my experience as a retail manager and focus as a former professional athlete has put me in a unique position to understand and respond to my customers’ needs with the necessary focus and drive to succeed.

“We use a proven system to place quality greeting cards and accessories such as gift bags, wrap and party products, in retail outlets on a ‘consignment’ basis. This means the stock and display equipment are installed on free loan to the retailer. This is one step beyond ‘sale or return’ as Card Connection customers never have to buy the stock initially, only paying for what they sell. The award winning merchandising service provided to retailers by local franchisees has proved popular with retailers across Ireland including Card Connection’s key national accounts such as Aramark, BWG, Londis, Musgrave’s and Topaz.

“We have taken the successful Card Connection franchise model, developed a team and added our own layer of efficiency to improve profitability. This has been achieved primarily by being selective about our customer base. Early on, I introduced a ‘threshold’ for profitable retailers and stopped supplying the least profitable outlets. Then I worked to win better retail stores to grow the franchise. I started out with 150 stores and quickly culled around 30 and then grew the retail customer base to 250 profitable outlets. This was a brave move but it worked! I addition, I have grown my team to ensure these customers are serviced in the best way possible. Despite the continued challenges faced by the Irish economy, I have been able to almost double the size of franchise within four years.

“Since start-up, I have also changed the way I work within the franchise. Initially, I spent most of my days on the road servicing retailers. However, now my team take care of much of the day-to-day merchandising and packing and I have taken on a more managerial role, focusing on overseeing progress, meeting with new clients and sales development. This means I can introduce optimal ways of working and keep the business moving forwards. I anticipate the franchise will grow a further 15% in 2015.

“Analysis of sales has also been an important success factor. Knowing which greeting card designs sell in which type of outlet means displays can be tailored to particular niche customer bases. It is also our job to educate the retailers about the stock we know will sell well. Many retailers only consider margin but I explain how it can be more profitable to sell less cards at a higher value price point than the ‘pile it high sell it cheap’ approach which is the way a few of our less successful competitors work. The popularity of higher price point cards has in fact been a growing trend in challenging economic times where customers are often choosing to buy a more expensive card instead of a gift and I have needed to educate retailers so we can capitalise on this.

“I have also introduced other measures to improve efficiency. For example I aim to reduce merchandising time in each retail account by adopting a faster stock taking formula. I have also developed clear route lines for new business development. This means, I ensure we can visit around 10 retailers in clusters in each town to cut down on driving time compared with often 20 minutes between calls when I started out. This saves time and fuel and therefore, lowers overheads per call.

“The results really speak for themselves. We achieved 95% volume growth between 2011-2014 and doubled our turnover. On target anticipated annual sales will be well over 400k units by the end of 2015.

David McKee, Regional Sales Manager: “Never have times been tougher in Ireland than the past few years and yet Simon has started up one of our most successful franchises during that time. His grasp of managing a customer base and his ability to build relationships and motivate his team has allowed him to approach the franchise by keeping the end game of profitability at the heart of what he achieves. However, he also understands that customer relationships and highest service levels lead to success and has his team focused on delivering every time.”