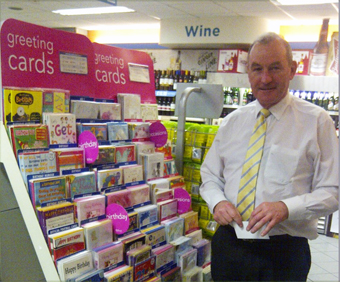 Leading greeting card publisher and franchisor, Card Connection, has announced Joseph Sweeney, franchisee for Ireland West and Midlands, has been named as a finalist for the Irish Franchise Association (IFA), Franchisee of the Year Award in the Service category.

“Joseph is a qualified accountant and before joining Card Connection in 1999 he worked within the BWG Foods Ltd Group as well as having run his own successful financial management consultancy,” confirms Michael Johnson, managing director, Card Connection. “Although established in the UK, at the time, Card Connection was new to Ireland. Over the past 18 years, Joseph has helped put Card Connection on the map in Ireland and grown his franchise operation from zero to a current turnover of €626k. He now supplies around 400 retail stores with Card Connection’s extensive range of quality greeting cards and accessories and has worked tirelessly over the years to nurture relationships with retail customers and build a solid franchise business.

“Joseph has won Card Connection’s own Franchisee of the Year award an amazing six times!” continues Johnson. “Plus, only last year he purchased a purpose built 5000sqft warehouse in Sligo with bespoke racking plus mezzanine/picking room and offices. Joseph now employs a team of six and runs six liveried vans servicing his retail customers. We feel he has really earned this important award nomination through his effort and determination to succeed over the years.”

Joseph Sweeney comments: “This success has been achieved because of incredible hard work and commitment from the whole team. Customer and staff care is the life blood of any business and will always be a priority for me Accessibility, consistency and communication we find are the key.

“However, to ensure success, retail accounts also need to be carefully monitored,” continues Joseph. “Every month we analyse sales performance and agree within the team what can be done to make improvements. To do this it is essential to have a grasp of the data and figures surrounding all the customers. This allows for informed decision making which is at the heart of our franchise business.”

The overall winners of the 22nd annual IFA Awards, which celebrate excellence in franchising and reward outstanding achievements from the franchise community, will be announced at a black-tie gala and ceremony held at Radisson St Helen’s Hotel, Co Dublin on 19 May 2017.


Card Connection is part of UK Greetings, which is a subsidiary of American Greetings Inc., one of the largest greeting card publishers in the world. Since the franchise network in Ireland and the UK is complete, the available opportunities for franchisees joining the network now consist of acquiring an already-established territory from an existing franchisee. These vary in price according to their level of development, but start at £12,5k + Stock + Card Connection fee with earnings potential in excess of £50k per annum.