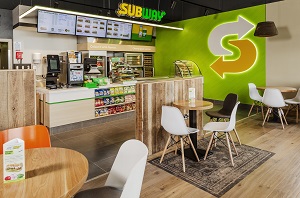 Subway is pleased to announce it has opened its 80th store in the UK and Ireland with leading independent petrol forecourt retailer, Applegreen.

The 80th store is located within the Applegreen petrol forecourt at Millfield Shopping Centre in Balbriggan, Republic of Ireland, and will be serving up a variety of tasty Subs, flatbreads and Salads to hungry drivers, shoppers and local residents.

Through its partnerships, such as with Applegreen, Subway now has more than 800 stores in non-traditional locations in the UK and Ireland, including hospitals, transport hubs, universities and colleges, petrol forecourts and convenience stores.

Justin Goes, Regional Director Europe at Subway® International B.V, added: “We are delighted to have reached the milestone of 80 Subway stores with Applegreen across its UK and Irish retail portfolio. Non-traditional development has been a key factor to Subway's growth in the UK and Ireland through our partnerships with the likes of Applegreen. It is great to see there are still many opportunities for further stores at its locations, and we look forward to working together to open many more in the future.”

Aaron Duggan, Head of Food for Applegreen, added: “We are delighted to be extending our partnership with Subway by opening our 80th store. We know our customers look to us for value and choice in fresh food and having a well-known brand, such as Subway, offers customers just that.”