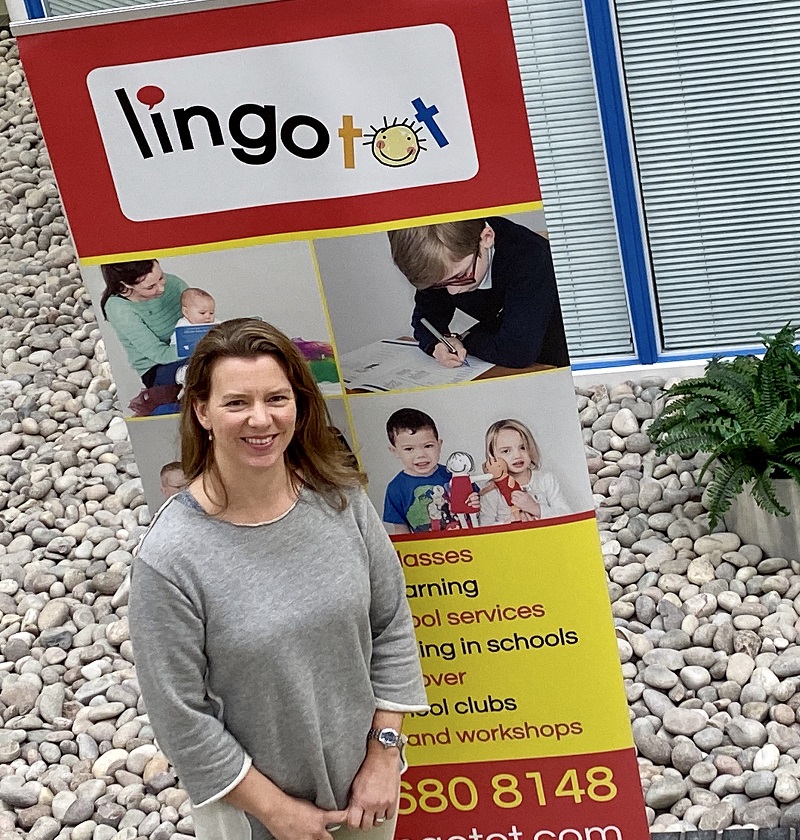 Please tell us about the Lingotot franchise:
Lingotot is a high quality, multi-award-winning children languages franchise. We offer classes to children aged 0-12 years in 8 different languages, using a methodology which is fun, interactive and designed to introduce a child to a new language through games, movement, songs, stories and crafts. All of our sessions are conducted almost entirely in the target language and can be held in community centres, nurseries and primary schools.

What is your business background?
During the 12 years I lived in London, I worked for Morgan Stanley in their Equity Research team and in Thomson Reuters heading up their Head of Corporate Advisory Services team for Europe.  Lingotot is my first adventure into owning a business and so far I’m loving it!

Why did you go down the franchise route and what made you opt for a master franchise?
Even before my 3 children were all in primary school, I spent some time thinking about not only going back to work, but what area I wanted to go back to. I researched and looked at potential opportunities all of which had to at least fulfil the one precondition of allowing me to also spend time with my family.   I came across Lingotot in early 2018 and it really ticked all the boxes.  I’ve been able to experience franchising first-hand and really enjoyed it. It is important to reiterate that the master franchise role is a completely different one but I am so passionate about the offering and see a strong need for this type of early education in Ireland, so when the opportunity came up I couldn’t let it pass.

Why did you choose the children’s services market and a Lingotot franchise?
I grew up in a multilingual home and later on used my languages in a professional capacity  so when researching I decided to focus on those skills.  I’ve always enjoyed children, so also decided that age group would be my target audience.  I really believe that that learning languages early on will help children later on in life in so many aspects. The other deciding factors were Lingotot’s renowned and award-winning brand supported by a solid curriculum and an extremely approachable team headed up by founder and CEO Angela Sterling.

It is proven that language immersion enhances cognitive function, improves academic performance, develops an increased awareness and appreciation of other cultures and potentially increases the child’s employment prospects in adult life.  With foreign languages becoming increasingly popular and compulsory in most Irish secondary schools, more and more parents will want to give their children a head start.

How did you raise the finance?
I was lucky enough to have some savings so I have literally put ‘my money where our mouth is ‘! There are a number of financing options out there via the pillar banks and the Local Enterprise Offices amongst others.

What are some of the challenges you have faced when buying a master franchise, and how did you overcome them?
Being the first franchisee in Ireland means that Lingotot is not as well-known as a brand as in the UK.  This involves a lot of networking, getting oneself out there talking to experienced people in the franchising industry and being open to constantly learning.  At the same time the challenges make it a really exciting time to roll out an already successful children’s education service across a new territory.   The key is not to pressure potential franchisees - they need to be invested for the right reasons and believe in the Lingotot ethos, product and methodology which is why the initial recruitment, training and ongoing support process is paramount.

What training and support did you receive initially and ongoing?
The initial training is an intensive weekend start-up program where most of the marketing and management side of running the franchise is covered.  This is followed by a formal qualification in the Certificate in Teaching Early Years and Primary Languages (benchmarked at level 3) and the Diploma in Teaching in Primary Languages (benchmarked at level 4) which covers the educational side although most franchisees are experienced and qualified language teachers already.

How would you describe your role as a master franchisor?
My role is to recruit, train and provide ongoing support to each franchisee in Ireland. I’m really excited about growing the Irish network in the growing children’s education sector.

How do you select the right franchisees for your business?
A franchise business is a two-way relationship. I think the most successful franchise owners will be hardworking, highly motivated and capable individuals with a ‘go-getter’ attitude and passion who can also balance the need for a hands-on approach with day-to -day management.

Lingotot has worked really hard to create a quality product and five-star reputation and offers its franchise owners an unrivalled opportunity to share in that success in a new territory.

What USPs has your franchise got over others in your industry?
Lingotot operates from an advantageous position as we are the only languages franchise within the UK and Ireland to offer 8 languages in the programme. The Lingotot languages courses are not only aligned with the KS2 MFL curriculum , the Primary Literacy Strategy and Early Years Foundation Stage, but are also fully accredited by NCFE CACHE (an OfQal regulated awarding body).

Lingotot allocates protected territories mapped out professionally which means franchisees are never in competition with each other. Franchisees have the freedom to teach as many languages as they’d like within their area.

Numerous revenue streams - there are also a variety of courses to appeal to the required challenge level of different age groups and settings. This ensures greater longevity of the brand.

Lingotot is a member of the BFA - The British Franchise Association. The BFA sets standards on what constitutes best practice in franchising and criteria for franchisor membership today include an examination of the business model; a review of the franchise agreement; assessing the training and support offered; and evidence that franchisees can sustain profitable businesses by scrutinising the Franchisor and a sample of franchisee financials.

Lingotot has won numerous awards as a national brand. These wins act as third party endorsements and reinforce the message of quality to our customers.

What is the most invaluable piece of advice you could give someone looking to buy a master franchise?
I’d definitely recommend starting as a franchisee first to get to know the product or service, the market, the customers etc. and demonstrate that you can run and understand the business.

What are the company’s plans for the future and your own personal plans for your business?
For 2020, our aim is to sign on new franchisees to join me in the Irish network. I’ll also be building relationships with key business and educational stakeholders.