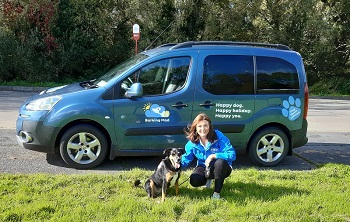 After working as a dog groomer for almost thirteen years, Jennifer Curtin was looking for a change of direction which still involved working with dogs. Her entrepreneurial nature has led to her changing the face of dog care in Ireland, with the first ever Irish Barking Mad franchise!

When she came across the multi award-winning franchise, she was very impressed by the great reputation which had been built up in the UK. She said,

“I was so proud to launch the Barking mad alternative to kennels in Ireland. Coming from a large extended family, this is the only time I’ve been the first to do anything, so it means a lot! Animals have always been my passion – I adore my own two dogs, Kala and Sky.

Brainstorming with a relative in Yorkshire, they asked if we had anything like Barking Mad in Ireland. After research, I concluded that we didn’t and went straight to the source to launch my own branch. I can’t fault the team at Barking Mad for their support. With their experience, all avenues have been tried and tested, so I’m confident that together we can make a success of Barking Mad in Ireland.”

When asked why she chose to go down the franchise route, Jennifer said:

“I had never thought of the franchise route initially, however, once the benefits were pointed out to me it seemed to make more and more sense. It is very comforting to know all kinks have been ironed out before you even start. They (Barking Mad) know what they are doing.”

“I was very lucky to have three days of one on one training covering all possible enquiries and they even took a trip out with me, in the local community, to show me the ropes. I can’t fault the team at Barking Mad for their support.”

When asked to describe her role as a franchisee, Jennifer said:

“At the moment it’s still fresh and new. I am the boss but I also know that the knowledge of the (support centre) team behind me is essential to success. I plan on leaning on them when necessary.”

Jennifer describes her biggest challenges as ‘juggling family life with starting a business’ but expects this to settle down as she gets into a more established routine. She goes on to offer the following advice for anyone considering franchising:

“Go for it! There is a team completely dedicated to you at the end of a phone line at all times. What more could you want starting out?”